It was the Anise that did it and the Orange was an accomplice! 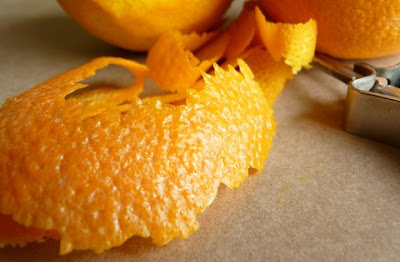 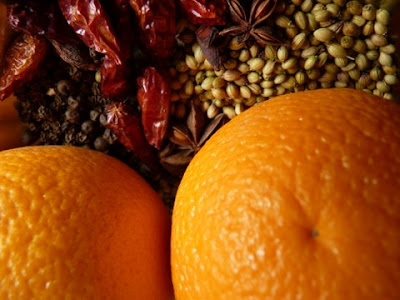 On my way home from my class on Gourmet gifts at Le 15, my head was buzzing with aromas. Things started on a friendly note with the subtle nutty notes of toasting sesame for a Japanese Gomashio seasoning and warmed up with caramel tones of frying garlic for an infused vinegar. Flirtatious notes crept in somewhere while the coriander was being roasted for the Coriander Chilli meat rub, that ignited into attraction as star anise hit the pan for the Chinese Five spice sugar. The embers of which were fanned into the first flames of desire with the grating of Orange zest for my Orange and Anise oil. By the time I got home, I was in the throes of a raging lust TO COOK.
The moment I was in the door, I headed straight to the kitchen, single-mindedly. I had to cook something delicious with Anise and Orange and I had to do it now! 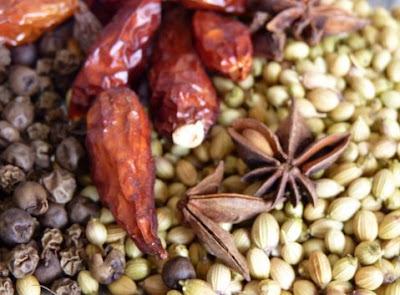 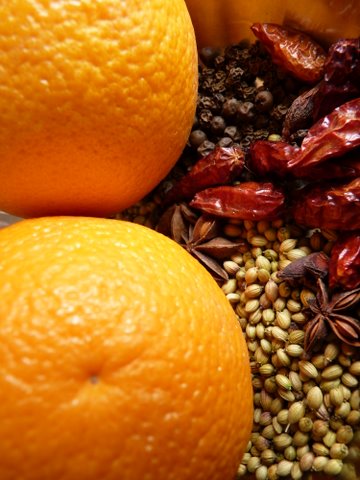 There was no time for the foreplay of contemplating what to cook. Niceties would have to wait for another day. I was already so hot and ready to go that any more preambles would be torture. The next 20 minutes are slightly blurred in my memory. I remember setting a pot of water to boil and adding in the noodles but then it was a frenzy. Too far gone to linger over ingredients or smell the basil, this was not a tender exploration of ingredients, it was a pounding need to drive somewhere.  Driven by feverish zeal I sliced up boneless chicken, peeled in the zest of an orange, ruthlessly squeezing in its juice and discarding its pith, scattering in generous handfuls of my coriander meat rub and too far gone by then to bother with the niceties of spoons I just stuck my hands in to massage all the flavours in.
As the anise and chilli sent out their siren call and the first bits of chicken hit the hot pan, the world receded, even the all important won’t-miss-it-for-a-5*-meal Masterchef Australia reduced to a mere buzz in the background. There was just me and that pan. The tension built fierce and consuming as the chicken sizzled and plumped up and I tore up a bunch of fresh basil leaves and stripped the leaves off a bunch of coriander inspite of their spicy protest. The noodles glistened up at me, wet and begging for a sauce to complete them, but they had a little longer to wait until the plum juicy  chicken joined them. And then the patient sauce that had slowly reduced to a glowing golden orange slickness happily glided in, spreading its goodness everywhere, coat everything in its warmth as jewel bright leaves sighed over, followed by crisp fried shallots. 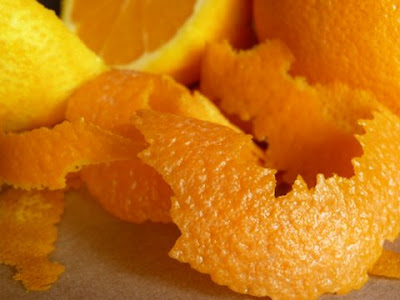 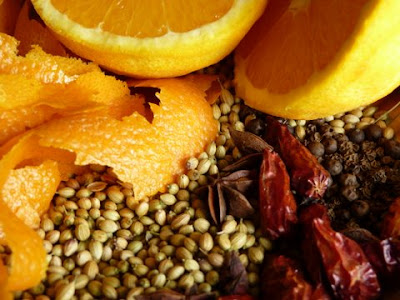 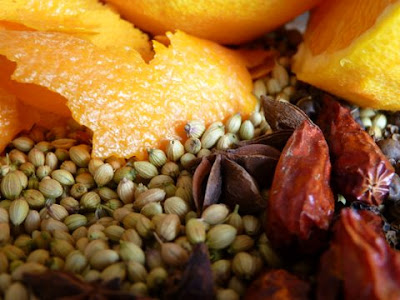 As we snuggled down to watch Masterchef Australia and more food porn, I realised that this situation (if one could call it that) had been building up since Thanksgiving day. I woke up that day to rain swollen clouds in my face and the smell of Sourdough baking.  And my first thoughts were of dipping that still warm bread in the single estate EVOO my friend Bino, gave me, seasoned with some fluer de sel and organic dried basil!
And that had pretty much been my state of mind, flavour pairings! Between my article on Flavour combinations for Poetry of Food, creating the class agenda for Gourmet Gifts from your kitchen and then receiving and jumping into the Flavour Thesaurus thinking about flavour combinations has had me distracted and all over the place this month. I just had to smell something and my mind was off!
Flavours and ingredients were bouncing around in my head like spices in a mortar and pestle; sesame and lemon, orange and anise, kaffir lime and chorizo, curry leaves and coconut, cocoa nibs and black cardamom, sage and pumpkin, rosemary and bacon...  I was going dizzy! Not just with food combinations but recipes I HAD to make and cravings that woke me up moments after going to bed. And then I realised, this is what A Perfect bite was about. Creating that perfect bite of flavour texture and taste. A Perfect Bite turns one year older this January and it is time for a change. I can’t guarantee posts as flaming as today, but they will attempt to capture the ethos of my cooking in pictures and recipes. 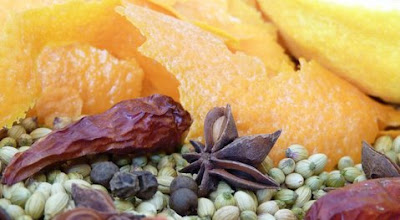 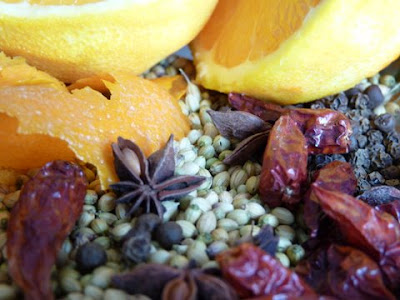 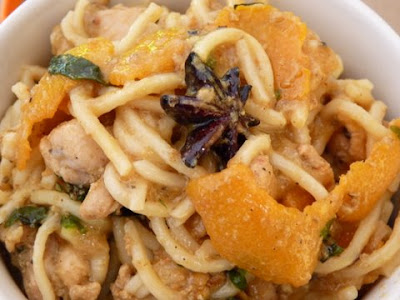 Star Anise Scented Orange Chicken Pot noodles
500g boneless chicken breasts
1/2 c Honey
Salt to taste
1 tsp Orange Zest
4 tbsp Corriander Chilli Meat Rub
2 c Orange juice
1 tsp oil
2 Star Anise flowers
1 stock cube
4 Tbsp Toasted Sesame Oil
1 Tbsp Corn flour dissolved in 2 tbsp. water
250 g noodles, cooked
Fresh Basil and Coriander to garnish
Fried Shallots to garnish
If you are using a claypot, soak the top & bottom of your clay pot in water for about 15 minutes. Drain. If you do not have a claypot, any vessel with a tight fitting lid will also do.  Combine half the honey, meat rub, salt, orange zest in a bowl, score chicken breasts and place in bowl. Marinate for half an hour. Heat a pan and brush with oil. When hot, place Chicken breasts in it and cook till browned. Flip and cook till brown on the other side as well. Transfer to a plate. Add the orange juice to the pan, this will deglaze it. Add Star Anise, stock cube and allow to boil. Add cornflour paste and stir in until just starting to thicken. Add toasted Sesame oil. Take of flame.
To assemble place cooked noodles in the bottom, slice the chicken breasts up and layer over noodles. Pour sauce all over. (your sauce should be pretty thin, just slightly thicker than water at this point. It will thicken more as it all cooks in the pot).  Cover & place pot in the middle of a cool oven or on a slow flame. Bake 1 hour or cook on the gas for 10 mins. Leave covered until ready to serve. Sprinkle over with herbs and serve topped with fried shallots.
** To make Coriander Chilli meat rub, place ¼ c sea salt, 1 ½ c whole spicy dry red chillies, ¼ c peppercorns, 1 c coriander seed in a blender and grind to a coarse powder. 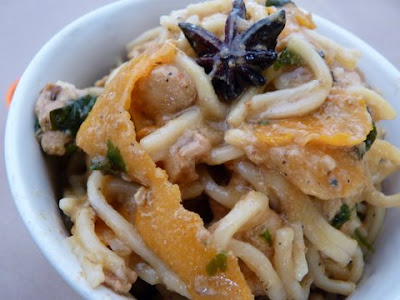 whoa, is this for real! the pics are awesome, rushina

I'm gonna give up reading men's magazines !! lol, I agree with KiM !!

wheeee wowooo wooo
ok that should say it all.

What lovely clicks of spices! Would love to use this combo for veggies pot noodles.

Lovely click...looks so appetising and flavorful.

Enjoyed reading this and what free flowing words and playing with them . Lots of learning here. Thanks for this Rushina

Women and food are inextricably linked.   Last night I got home rather late. To find dinner the cook had made was a bit of a flop. Non... 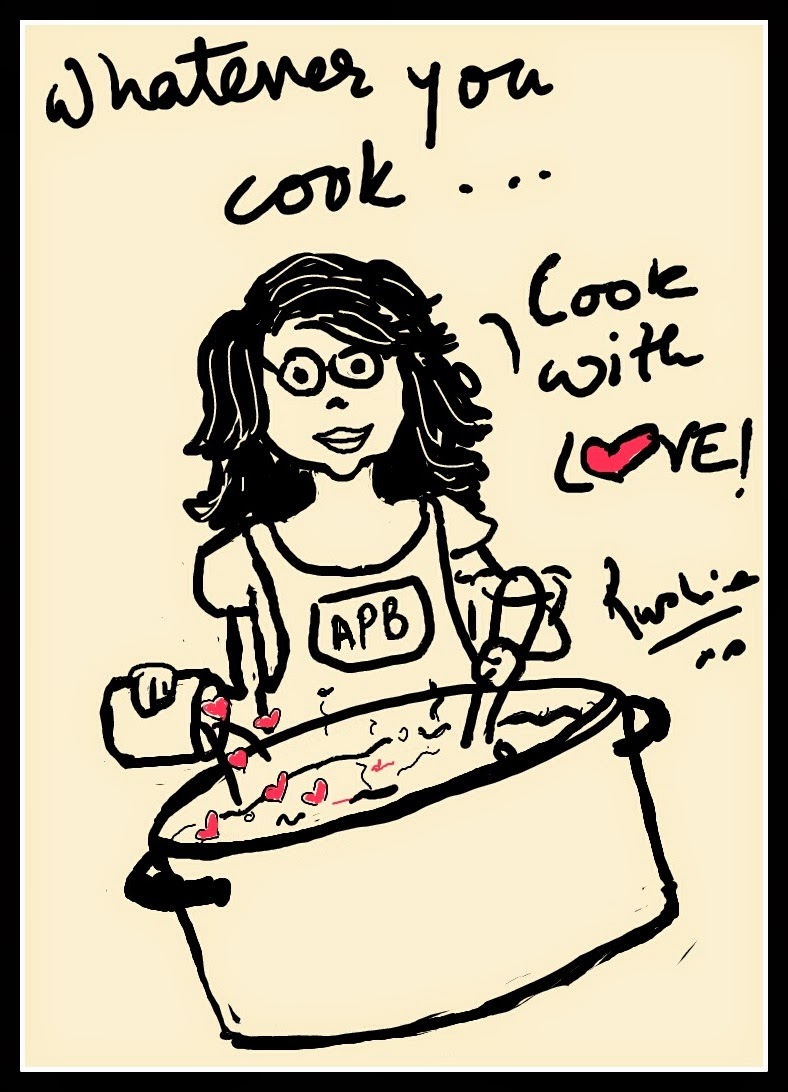 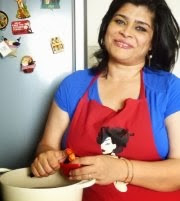